IRAQ PROJECT. In Sept 2014, the week the American-led air strikes started to rain down on Iraq, I flew to Erbil in Kurdistan, to work with AptArt.

AptArt (Awareness & Prevention Through Art) aims to give vulnerable children an artistic experience with an opportunity to express themselves as well as an outlet to build awareness and promote prevention about the issues that affect their lives. I emailed Aptart as we were doing similar things, and was asked to join them on their latest project in the refugee camps that have spread around Erbil city, Kurdistan’s capital.

The situation with refugees fleeing from firstly Syria amid Assads regime, and now more recently the horrific onslaught of ISIS that’s sweeping across Syria and Iraq, gained more than 500’00 refugees in the first week fleeing to Erbil alone. By the end of Aug it has been estimated that 6.5 million people have been displaced and over 3 million have fled to neighbouring countries. At the time of writing Assads regime still continues in Syria and ISIS are still battling in Iraq.

I worked in two camps while there, the first being Darashakran. This camp was set up in Sept 2013 with the first relocation of refugees coming from transit camps around Erbil. It consists of mainly Syrian/Kurd refugees and also Yazidiz and Christians.

I had only one day in Darashakran, and I was to run a portrait workshop with a group of kids from about 7-10 years old. This taught them the basic structure and proportions of the face, and how to draw minimal lines to capture their likeness. They were given more artistic licence and able to paint a large canvas, paint faces on balloons and were taught drawing games that they could play on any surface using any mark maker. Unfortunately my camera was out of battery on arriving in Erbil, so I have no photos of this workshop.

For the remaining 5 days we were based at Quashtapa camp, where I painted the mural along with varying numbers of children at various times throughout . I always had a crowd at least watching , trying to join in, or cheekily run off with the paint and brushes.

The Arabic scroll reads ….. Our path, our journey, our life, our world.

“Rose worked with us in Iraq on a project creating street art with Syrian refugee youth. She did a great job engaging the kids and working in the unfamiliar conditions. Rose took particular care to make personal connections with the kids and ensure that each of them was able to get creatively involved with the wall.. Throughout, she kept up a positive attitude and was a pleasure to have with us.” Leah O’Brian programmes manager at APTART 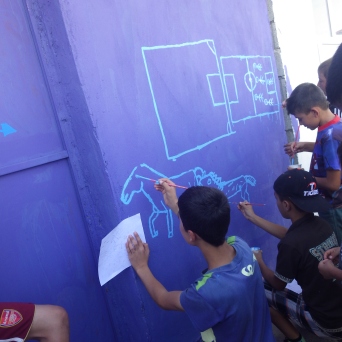 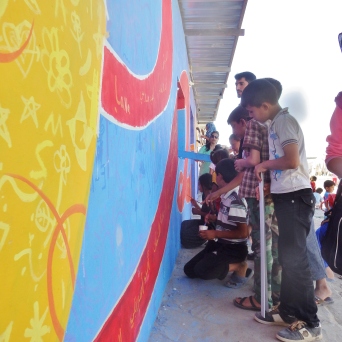 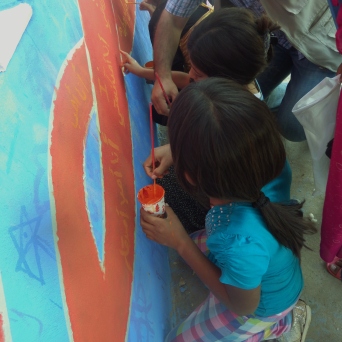 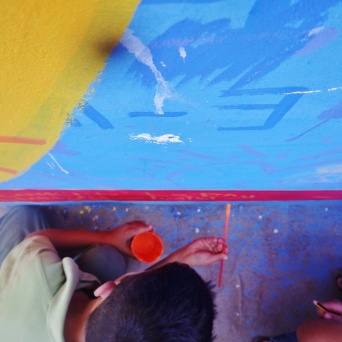 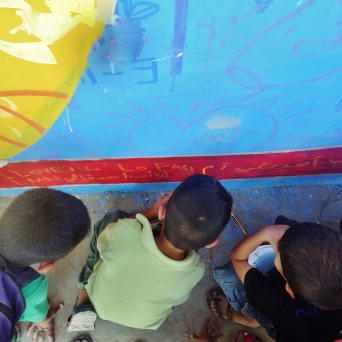 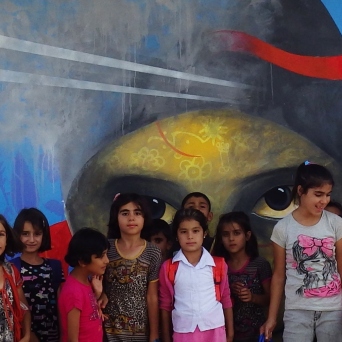 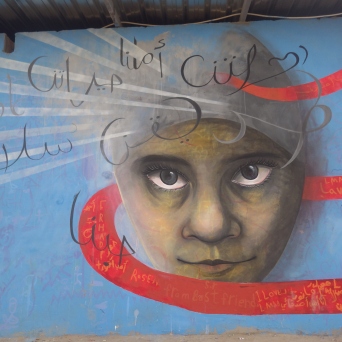 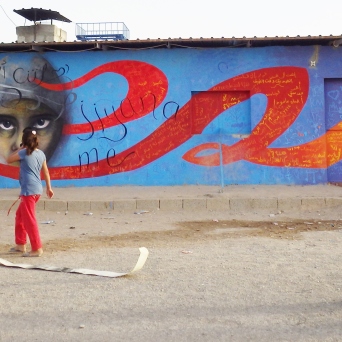